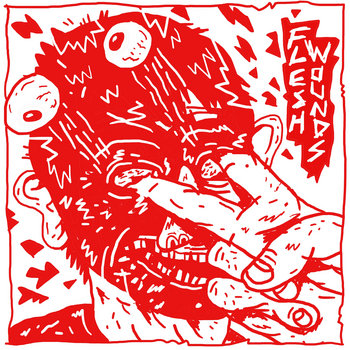 Laura’s long-lost punk band Thee Scab Eaters got shelved when its other founding member had kids, so she recruited new guys for a loud rock band. Montgomery only knows chords and shrieks and really likes 1950’s R&B, so the band is really chordy and shrieky and likes to play songs from the 1950’s. Dan is really good on guitar and has been studying Chuck Berry for years, but his drum playing is the band’s ace-in-the hole since it lets Laura and Montgomery sing songs at the same time and pretend to be X. Flesh Wounds is from Chapel Hill, NC — Yes, the band is named after a line from Monty Python.