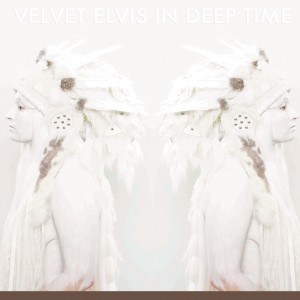 The debut full length LP from Velvet Elvis, In Deep Time was recorded at GFI Studios in the early months of 2012, where Velvet Elvis drank deep from the well of rock to bring about six dark tracks of paranoia and depravity that call up hallucinogenic visions of a future gone wrong.  The songs thunder and crash, sweep and swoon with a greater depth and clarity and vision than we have seen from this band in the past. An expanded sense of texture and dynamics move their signature plodding riffs along to crescendos that could open a hole in the sky. In Deep Time is pure unapologetic rock and roll.  The album was produced by Velvet Elvis and Sam Polizzi and mastered for vinyl by Joe Lambert.

Hand numbered, in a imited edition of 300 copies that include a lyric sheet, a section of the analog tape included in the recording process, and digital download card containing the whole album with exclusive bonus track “Brass Tacks”.  Pre-order is up now!