Kimono Draggin’ is an American avant-garde Indie Rock band formed in 2003 from New Haven, Connecticut. The lineup consisted of Joseph Nolan (Guitar,vocals), Yossi Hatton (Bass,vocals), and Chris Swirski (Drums,vocals). Their version of progressive rock is strongly influenced by bands of the 1970s and 1980s including The Stooges, The Mothers of Invention, Talking Heads and Minutemen. We just finished pressing their Kimono Gold LP on gold wax, and you can pre-order it now!

The band is currently in the final Top 30 of the Verbicide Magazine Unsigned Band Contest, so if you get a minute, feel free to give them a vote! 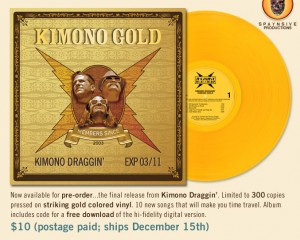