Available now from Deathwish — I Am Not:  The Discography.

Within months the sound and ideologies that dominated the hardcore scene from the mid 80’s into early 1990 had literally collapsed as if an entire scene had “grown up” and gave in all at once. Looking back it should have come as no surprise. A scene that was predicated on being an individual had become as pathetically uniform as the world it claimed to disdain. It died because it no longer had a pulse.

In early 1991 a few friends decided that sound, feeling, and emotion was more important than mere memories, and that ideals didn’t need to be confined to the sounds of the past. There were no goals, no strategies, and no need to over think what could be. With that, a band was formed, and Ressurection set out to play as loud and as often as possible.

Musical influences? Black Flag, Bl’ast, Absolution, whatever. A message? At times straight edge, at times political and at times just hurt kids. Simply put the idea was to say what you feel and feel what you say, no limitation. Ressurection was noise and feeling.

Between 1991 and 1994 Ressurection played well over a hundred shows around the US while releasing 2 EP’s, an LP, and a few tracks on various compilations. The beauty of Ressurection? The sole focus on the energy of the live setting. The downside? That same sole focus on the energy of the live setting. When recording the “I Refuse” LP the band was in heavy debt from touring and used all of the recording budget to pay off their debts leaving $200 to record, mix, and master the record, and of course, buy something to eat during this process. The result was not pretty. Over the years this remained a regret shared by the members of the band.

In 2007, the idea of a discography was brought up to the fine people at Deathwish. Over a four year period, the recording reels were dusted off and Kurt Ballou completed a remix at Godcity Studios. Soon after, additional tracks were collected and the result is the 21 track “I Am Not: The Discography”, containing remixes of all three records, the band’s first recorded song, as well as their classic live set from KXLU in its entirety.  Here it is, on three limited-run colors of wax. 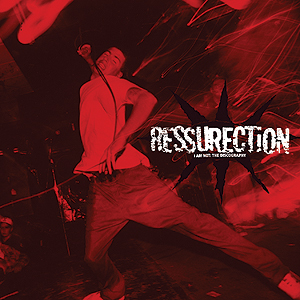