Looking for something new to move you?  Check out the new Buffalo Clover album – Low Down Time, available from Nashville’s Palaver Records.

Buffalo Clover is a rare plant that grows in the wake of stampeding buffalo. It is also the name of one of Nashville’s most eclectic bands. Fronted by songstress Margo Price, the group draws its inspiration from true roots music. Price and her husband/co-writer, Jeremy Ivey, formed the band after meeting in Nashville in 2008. Their styles range from underdog gypsy punk to Motown boxcar blues, Vaudevillian acid rock to train wreck folk. Their songs are unique yet familiar with a lyrical craft rarely present in popular music.

The musical line up of the group has changed over the years, but the core has remained the same. With the meeting of guitar/banjo player, Matt Gardner in 2009, the band added the talents of another great writer and performer. The three have played with a rotating cast of musicians. Bass player, Jason White has also been an important part of the group since 2008. 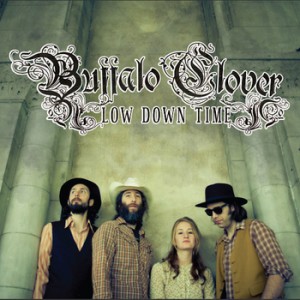